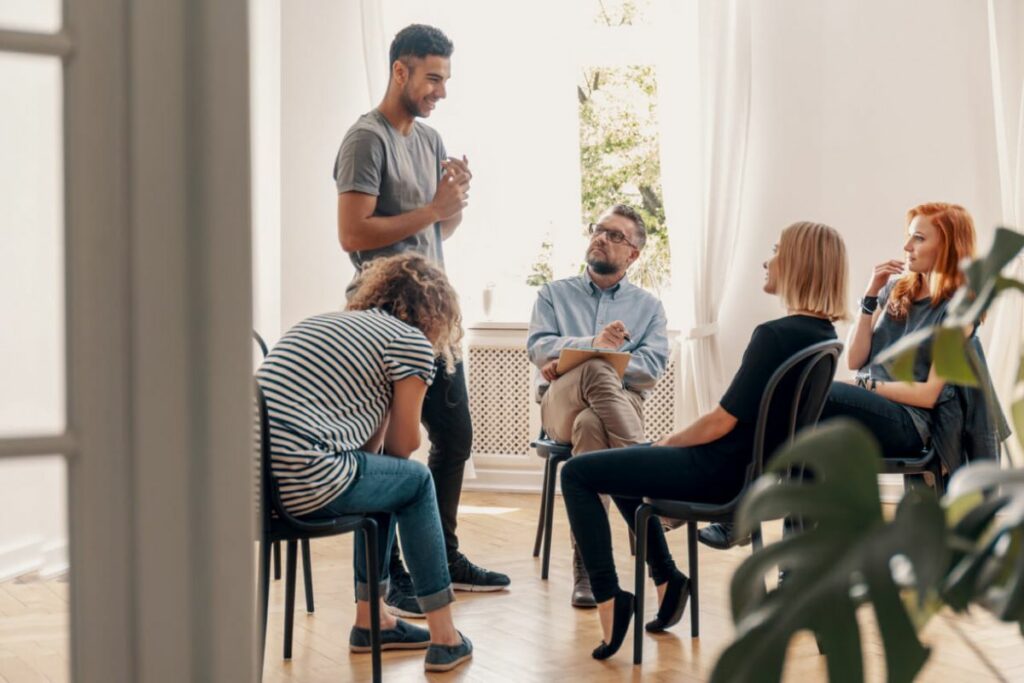 Why did you come to Help Me Stop?

‘I started at Help Me Stop at the end of June. I’ve completed the programme and am now on my way to being fully rehabilitated in society. As of this week, I’m 59. Years ago, I had an affair with somebody which persisted and we managed to have two children, both of whom were a surprise to me. I have been living a secret for three years because I didn’t want to tell anyone about it.

‘In the last few years, I thought that I would take the secret to my grave. I think I was showing signs of erratic behaviour which included drinking too much, sometimes provocatively, and sometimes other obsessive behaviours as well including occasional drug use. Drinking has always been a pattern in my life, but it has certainly been heavier in the last few years.

‘My wife found out when a letter came through the door addressed to me from the child maintenance support agency. It all ended in tears and me accepting advice and seeing a need to do something about it.

‘I chose Help Me Stop because I read an article in the newspaper about it. It’s designed for people who didn’t want to do a residential course, and it struck me as a neat solution for me to spend some time addressing my own behaviour and habits and to see if, being serious about treating them, I could actually resolve some of my problems.’

When you came here, did you feel like ‘yes I can do that’?

‘I have always felt that the decision that you make to come here is the most important thing. I’ve met people in the process of this who’ve been to up to 19 different treatment centres, which strikes me as horrifying that you can go through and fall off the wagon again. But it does happen.

‘I took the decision that I needed to do this for myself. I think a long period of time of better and calmer behaviour, and not seeing me with a glass in my hand all the time, might help.’

When you came here, was it for the drinking or for the whole pattern of behaviours?

‘In my case, I realise now that some of the programme is based around the 12 steps which I had never thought applied to me, nor thought it was in any way relevant to me. So, I think my own behaviours are a pattern of interlinked obsessive stuff. But I realise that knowing more about them and understanding my motivations more is really useful.

‘Of course, much of it has been a surprise. I had never been to an AA meeting in my life and I found it absolutely riveting and extraordinary. They trust honesty, they live for the day. They need help and want the help and advice and example of the people around them. That’s humbling.’

After hiding so much, and then being a group of people sharing similar experiences to you, how did that feel?

‘Hearing other people’s stories makes you feel a bit of a fraud because there are some people who are very much more distressed than I am and have been. You’re hesitant to compare yourself with them. But the beauty of the system here is that it throws you in together and you very rapidly find, and are encouraged to find, common bonds.

‘Once you stay clean for a bit, I think you do feel yourself calming down and being more reflective. It connects you strongly to other people and reminds you of the essential common goodness of humanity of all different shapes, creeds, colours, sexes, and sexual orientations. I think that’s a wholly good thing. It’s surprising the bonds you can make.’

Would you say that the children with the person you had an affair sparked the issues you’ve talked about, or was it from when you were younger?

‘Since I’d been married, I was monogamous. So why did I have an affair when there had been other occasions where I might have done but I hadn’t done so?

‘I think it was reflective of some wider problems in my own relationship with my wife. I regret what I have done. I now have two other children that I don’t see and I don’t want them to be fatherless children. I do what I can to help but it’s not enough.

‘My drinking is casual and, occasionally, too much. Recently it was too much. I think you can train yourself to sustain an awful lot. I was taking coke probably more regularly than I was caring to admit. And as a solitary activity rather than a social activity. I wanted to keep it secret.

Do your family know you’ve been coming here?

‘My wife and my children know, yeah. The response has been wholly good. The time I’ve been coming here I’ve also been going to a marriage guidance therapist with my wife.

‘If I look at the last few months, I think it’s been wholly good for me. There has been a lot of goodwill and patient fellowship and humanity, which forces you to look at different aspects of your behaviour so you can address them. So that’s been really good.’

Do you think that the fact that the people working here have been through addictions themselves makes a big difference?

‘I think it helps. You wouldn’t necessarily need to be a sufferer to do that, but it definitely helps because you’ve established common ground. They know how secretive and manipulative self-deceiving addicts can be.’

What are your thoughts on the Dayhab format?

‘Well, it has been particularly helpful. In the newspaper article I read, it said it was designed on the American model for the busy executives and the like who had jobs or lives to carry on with. So, it surprised me that for the first two weeks it was me and another guy who I have come to love, and he’s about as far from the model of what the article described as you can get.

‘So that was good for both of us because we found common ground which was unlikely from the outside world. Since then it’s filled up with all sorts of people, most of whom succeed in the course.’

Will you be doing more with Help Me Stop?

‘For the last few weeks I’ve been doing aftercare so coming once a week and what we’re meant to do is take our relapse prevention plan, keep going to meetings and keep working those steps.’

To what do you ascribe your problems?

‘I know some of my behavioural oddities. What do I ascribe it to? Habit. Opportunity. That sense of invincibility. I can also compartmentalise and rationalise things which meant that I thought I could live with secrets better than I was able to do so.’

Has coming here helped you understand that more?

‘I’ve subscribed to the method because I’ve seen the sincerity in which the believers believe it and some of their outcomes. Having people who had worse or similar problems to me emerge as coherent, reformed people seems to me to be a fantastic result. Sometimes, though, my own mind gets in the way of some of it – that’s my trouble.

‘The name of the programme ‘Help Me Stop’ it’s about you. I know that the work is done by ourselves. Yes, the responses from others around you help you, but fundamentally it’s down to us. You can’t do it just through willpower alone like I used to think.

‘The urge to drink or go and do some lines doesn’t really go away, it just recedes. So the question is, how do you identify the behaviours that are likely to make you want to do it? And what do you do to stop them? The consequences are really big; I haven’t lost everything, but other people have, and that’s awful to see.’

‘Just before coming here today I was with my trainer who is now 9 years clean. He said the first two years of getting clean were most difficult. I’ve stopped counting how many days clean I am because I had one lapse after I did my 60 days, so I’ve sort of gone back to the beginning again. But that’s okay.’

How do you feel towards yourself after this programme?

‘I think I’m definitely calmer, less irritable and more inclined to give people the benefit of the doubt. If you come here for days on end and spend a lot of time questioning what you’ve been doing, it’s quite tiring. You can feel a bit ‘blah’ at the end of the day – it takes it out of you.

‘But time is crucial. I never had the concept before coming here that when people say ‘it really is one day at a time’ – they really mean it. Most people don’t think of the world like that, but these people do and it really helps. After a few months, your skin’s better, you sleep better, you get up earlier and you can do your tasks. You don’t put everything off and you can address your problems. Good, kind people that you will have discovered in a similar position to you help you with the problems of your life. This is all a revelation to me, and it’s very powerful.

‘I think it has helped me. I have done a shameful thing and it haunts me, and the consequences will be with me for the rest of my life and the rest of other people’s lives. I don’t know what the answer is, other than to try and open my heart and say ‘forgive me’. The pressure of it never goes away.

‘I have a problem with substances. I don’t think I’ve had anything like the scale of addiction that other people I’ve met have. It’s that connection with having a busy day at work, being stressed and taking an addictive substance in order to relieve the stress. People get addicted because drugs work.’

What would you say to someone suffering and looking at Help Me Stop as an option?

‘I would definitely recommend it. I really would. It’s a new programme and I wasn’t sure what I was getting involved in and I think, in retrospect, that I was pricklier and more difficult when I came here than now. I think you give it time; you take what is being done for you seriously and I defy anyone to think it’s not a fantastic and really useful programme that will have positive benefits on how to live your life.

‘Once people have decided they need help, that’s a huge first step. You’re on the path to reform and self-knowledge. Once you start understanding why we behave and do what we do, then you’ve got a chance at making it better. No life is lost.’